The softest of black suedes. A small sliver of a rare South African skin that I had been saving for something special. It was laid out flat next to the vibrant purple of a Spanish relaxed grain leather. The contrast was beautiful. The colours complimented each other and as I sat down to study the striations and view the detailing of the leathers further, she wrapped her arms around my shoulders and hugged me from behind. Nothing was said, she simply wanted to see.

It needed to be perfect. It needed to be special. She had picked the leathers, her favourite colours, and I was about to build it for her with my bare hands while she watched.

There is nothing quite like the smell of freshly cut leather. My blade sliced through her choices effortlessly as I cut the strips required. A soft but strong backing of the blackest night followed by the warm and vibrant colours that would accentuate and bring life to that darkness. I could not help feeling slightly amused at our dynamics similarities.

Metals next. The strongest of steel. Cold and hard. An armour of chain for its front and a little love willed into every ring as they were forcefully weaved together. As the skies darkened and turned to night, I flicked my workbench lamp on. The dim light glistened off the metal as I held it aloft to look closely at the weaved florets and I could feel her smile as she continued to watch it take shape in my hands.

The next step was aesthetics. Those little touches of beautification. Not because it needed such things, but because they are desired. The reflected shine from the steel bezel blazed into my eyes as I placed it in position, enhancing its every detail. The victorianesque patterns which oddly reminded me of rope whenever I looked at them closely were glistening in the light and I began to reminisce of the previous evenings play in the very spot where we were now. I was tempted to repeat the process. Her scent was constant and delicious, I could feel her soft breath on my neck and it would have been so easy to simply throw down my tools and grab her for another ropey roll on the floor, but this was important, so as I brought the hammer down roughly atop the clear crystal rivet center of the final touches, I shook the desire to the side and promised myself the pleasure at a later date.

It was late by the time I had finished. All was quiet as I stood in front of her with the finished creation and held it in the light where she could see it clearly.

“Are you sure?” I asked as I gave her a meaningful look.

Her meek grin was incredibly cute as she nodded back at me.

The last ingredient was already in place as I slipped the leather and steel collar around her.

Her smile widened as the click of the padlock shattered the silence and as I pulled her towards me by the belt, I gave her left nipple a playful pinch followed by a toothy grin.

“Mine” I growled through the smile as I wrapped her in an embrace. 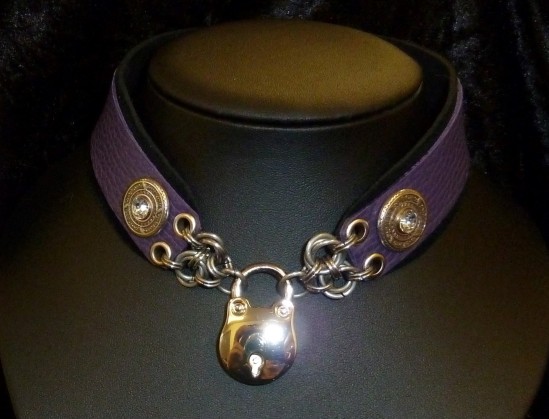 I have very little experience when it comes to ageplay. I find it difficult. But it is not something I rule out as a hard limit. I will always make an attempt at being the motherly figure. In fact, I believe I do it rather well towards adult-minded menials and petplay enthusiasts.

I can be loving when the mood takes me.

But I will never forget my first ageplay session. The baby-spaced menial was laid down on the bed in my dungeon with a large towel beneath him and I had just changed, or rather, attempted to change his nappy (It can be incredibly difficult with claws).

He started to mock cry, so I decided to improvise.

Bearing my teeth in a forced smile and saying “Coochi coo” did not help either.

Luckily, I do not get many requests for the babyplay fetish.

She was cuffed and belted to the St Andrews cross, her nipples were adorned with clover clamps and I had been gently tickling her in sensitive areas with the tips of a leather stinger flogger for at least a half hour.
She had forgotten about the clamps. They can be a little painful when administered (depending on how sensitive the area is. It differs with each individual) but the cut of blood flow causes them to numb rather quickly and it is not long before they can be forgotten completely as long as alternative sensations are made readily available and they are left untouched.

It was time to remove them.

The main thing that most people do not realise when dealing with nipple clamps (or any other appendage clamping) is that it hurts far more taking them off than it does putting them on or wearing them. The blood rushes back into the area causing sensations to return at lightning speed and nerve endings to rage at having been deprived of body fluid for so long.

A moan of relief as I placed my hands over the clamps turned quickly into a yell of agony as I released them. She was gagged to make sure the noise did not carry too far (I always prepare for the worst). A string of drool ran down her chin as the noise ebbed away (I gently stroked the pain away with the back of my hands) and it was at this point she did something that surprised me: she turned her face directly towards mine and flashed me a defiant look.

Never a good thing to do.

The clover nipple clamps bounced and clinked off the dungeon floor as I forcefully threw them down and slammed both my hands against the wall on either side of her head before leaning in to within an inch of her face, bearing my teeth and letting out a rather forceful and animalistic growl (not something I can actually do at whim, it is like a deep rumble that emanates from the chest and throat and tends to just happen on rare occasions when I feel overly aggressive, if I am over-the-top annoyed or if I have had an incredibly hefty and satisfying lunch. Though it does tend to sound very different if my mood is placid).

She closed her eyes tightly and turned her head down and to one side in submission. She knew what she had done.

I stayed there a few brief moments, watching her expressions carefully, before finally removing her gag and releasing her from the cross. I did not need to say anything. She dropped to the floor and scrambled on her hands and knees with her head lowered to face where I was standing and placed a very attentive kiss on each of my steel heeled boots.

I often get asked why I do what I do. Why am I a Mistress? Why do most call me “evil”? (though granted, sometimes it is meant as a compliment and is taken as such regardless of if it was meant to be) Why do I enjoy inflicting pain, corruption and suffering? Why does my mind automatically turn to kink whenever a vanilla subject is being talked about? Why do I then have the urge to corrupt said vanilla individuals? The list goes on and is by no means limited to these few. Whenever directly asked any of these questions, my answer is simple: I am a scorpion (Granted. A slightly demonic, relatively twisted, highly intelligent (comparatively speaking) and completely sadistic scorpion. But a scorpion nonetheless).

I can imagine many of you are now reading this post with a rather befuddled look on your face. Just as many have had that same look when I have given them that answer.

I have graced a few menials ears with this story in the past. It is an old story (possibly dating back to as early as the 12th century, but nobody can really pinpoint its date) and both the origin of it and author of it are unknown. It was told to me as a child and now I will tell it to you.

The idea of “story time with Mistress” must now be driving all those out there with an ageplay fetish to the edge of their seats (or cute and fluffy floor cushions with sewn in motifs of various fuzzy animals as the case may be).

I hope you are all sitting comfortably.

The Scorpion and the frog:

One day, a scorpion looked around at the mountain where she lived and decided that she wanted a change. So she set out on a journey through the forests and hills. She climbed over rocks and under vines and kept going until she reached a river.

The river was wide and swift, and the scorpion stopped to reconsider the situation. She could not see any way across. So she checked upriver and then checked downriver, all the while thinking that she may need to turn back.

Suddenly, she saw a frog sitting in the rushes by the bank of the stream on the other side of the river and she decided to ask the frog for help getting across the stream.

“Greetings Mr. Frog!” called the scorpion across the water, “Would you be so kind as to give me a ride on your back across the river?”

“Well now, Miss Scorpion, How do I know that if I try to help you, you wont try to kill me?” asked the frog hesitantly.

“Because,” the scorpion replied, “If I try to kill you, then I too would die, for you see I cannot swim.”

Now this seemed to make sense to the frog. But he asked. “What about when I get close to the bank? You could still try to kill me and get back to the shore!”

“This is true,” agreed the scorpion, “But then I would not be able to get to the other side of the river.”

“Alright then. How do I know you wont just wait till we get to the other side and THEN kill me?” said the frog.

“Ahh,” crooned the scorpion, “Because you see, once you have taken me to the other side of this river, I would be so grateful that you had helped me, that it would hardly be fair to reward you with death, now would it?”

So, after some hard thinking on the matter, the frog agreed to take the scorpion across the river. He swam over to the bank and settled himself near the mud to pick up his passenger. The scorpion crawled onto the frog’s back, her sharp claws prickling into the frog’s soft hide, and the frog then slid back into the river. The muddy water swirled around them, but the frog stayed near the surface so the scorpion would not drown. He kicked strongly through the first half of the stream, his flippers paddling wildly against the current.

Halfway across the river, the frog suddenly felt a sharp sting and, out of the corner of his eye, saw the scorpion remove her stinger from the frog’s back. A deadening numbness began to creep into his limbs.

“Oh no!” croaked the frog, “Now we shall both die! Why on earth did you do that?”

“I could not help myself” said the scorpion, “It is my nature.”