A little under two weeks ago, Benjamin and I visited the Birmingham Bizarre Bazaar and every time we visit; a look over a particular trade stand is mandatory: Jack’s Floggers.

Jack’s Floggers created the majority of my named toys: Sasha & Tempest, Scylla & Charybdis, Pooky and now also Phobos and Deimos. He is possibly my favourite designer and creator of impact play toys.

In fact, the only named toy that I currently own that he has not created is Angele (which was originally created in 1933 by Vitalis and fully restored by Lisa from Bound2Tease.net).

Phobos and Deimos are the latest additions to my arsenal of named beauties. Lovingly purchased for me by my Benjamin while mandatorily visiting Jack’s trade stand. 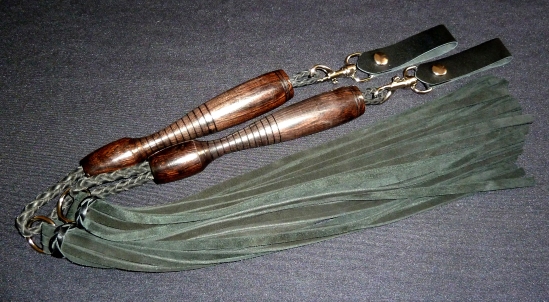 Normally I have my custom items designed from Dymondwood, this set has handles which have been created from my second favoured choice: African Blackwood. The reason for such is because they were not originally custom designed for me, I simply fell in love with them upon sight.

Phobos and Deimos are what I normally refer to as ‘detached’ floggers. Which means that the falls are detached from the handle by a short length (in this case, a 3 inch detachment of platted leather followed by 16 inches of soft but heavy, full suede falls).

Named after the mythological twin offspring of the Greek god or war (Ares) and the Greek goddess of beauty (Aphrodite), Phobos (fear) and Deimos (dread) were said to accompany their father into battle (for my geeky readers: the two moons of Mars bear the same namesake).

They pack quite a lovely thud. I am still applying treatments of moisturising cream to Benjamin‘s back to sooth the impact dehydration from that evening of public floggings (though I will admit that he received quite a lot of punishment that night).

Without a doubt: Worthy of their names. Thankyou my sweet Benjamin. I love them.